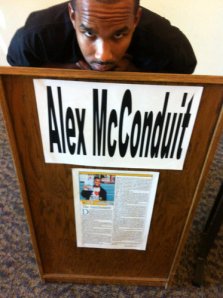 Alexander Brian McConduit is a writer and entrepreneur born and raised in New Orleans, LA. In 2010, Alex McConduit founded Big Boot Books and published his first book, The Little Who Dat, Who Didn’t.  In 2012, McConduit published his second book, Snowballs for All, a children’s rhyming book about a kid and his search for snowballs. Later that year, he also founded W.R.I.T.E., a youth publishing program that transforms students in New Orleans into published authors. Since 2010, Alex has visited schools throughout the gulf coast and the U.K. to share his books and to encourage kids to read, write and follow their dreams. For these efforts, Alex was honored as one of Gambit Magazine’s Top 40 Under 40 in 2012. In 2013, Alex was selected as an honorary board member for First Book of GNO, an organization that provides new books to children in need, addressing one of the most important factors affecting literacy; access to books. McConduit’s newest book, Thorn in My Horn, was released late June 2013. The illustrations in Thorn in My Horn are accompanied by music written specifically for each scene so kids can read and play the music in the book. In February 2015, Snoballs for All was accquired by Pelican Publishing and has been re-released with new illustrations from Pauline Gancheau and updated text. Alex is now visiting educational institutions all over the world to share his passion for his two loves; knowledge and New Orleans.

One response to “Alex McConduit”