It’s spring in New Orleans, and that means it’s snoball season! Paul is sitting in school when he hears the magical call “Snoballs for all!” He embarks on an adventure through the city, hoping for just a few of those icy treats. But where are the snoballs? On foot and by streetcar, Paul searches high and low. He thinks of all the flavors he could have: grape, strawberry, wedding cake, spearmint, apricot pear . . . but where is that call coming from? If there are snoballs for all, can’t someone spare just one for Paul?

The Little Who Dat, Who Didn’t

The Little Who Dat, Who Didn’t, is a book about a boy named Buddy and his Love/Hate relationship with the New Orleans Saints. Buddy is the only Who Dat, who didn’t cheer for the Saints on their way to the Super Bowl. Every time someone says, “Who Dat say dey gonna be dem Saints!?” Buddy responds, “Who didn’t beat the Saints?!? EVERYONE beats the Saints!”

All of the characters are named after Saints players & figures and there’s even a glossary in the back for non-New Orleanians to explain things like Second Lines, Gumbo & Crawfish! Follow Buddy, his family, his friends & the city of New Orleans as you relive one of the most memorable times the citizens of the Crescent City have ever seen.

Thorn in My Horn

Thorn in My Horn is a book about a young musician in New Orleans who LOVES to play his horn. His mother, on the other hand, cannot stand to hear the noise! She’s literally a thorn in his horn! This beautiful book includes detailed illustrations by Darrell Rollo that accurately depict the French Quarter, Jackson Square and other iconic places in The Big Easy. Thorn in My Horn adds another layer of depth, by including a musical score inside the illustrations. Anyone who can read music has two ways to enjoy this book. Thorn in My Horn is a rhyming, children’s picture book suitable for ages 3 and up.
Click HERE to purchase!
Written by: Alexander Brian McConduit
Illustrated by: Darrell Rollo

Peter and the Pelican 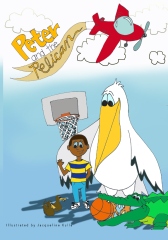 Peter and the Pelican  is a book a young boy named Peter who lives all the way down at the bottom of the map in Grand Isle, Louisiana. One day, Peter and his friends discover that their favorite park is closed and their friend, the Pelican, helps them find out hwy. The kids learn about ecosystems, how they can protect the environment and also… their beloved park!  Peter and the Pelican is a children’s picture book suitable for ages 6 and up. It discuses environmental issues in a fun and friendly way. It also includes a glossary and information on how kids can help save our planet!